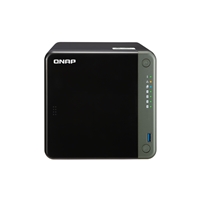 Upgrade your NAS to 2.5GbE networks
The TS-453D comes with two 2.5GbE RJ45 LAN ports that allow you to use existing CAT5e cables to upgrade network speeds from 1 Gigabit to 2.5 Gigabit. The dual 2.5GbE ports also support Port Trunking for up to 5 Gbps! By using QNAP's N-BASET/Multi-Gig USB 3.2 Gen 1 to 5GbE adapter (Model name QNA-UC5G1T) or 5GbE PCIe expansion card (Model name QXG-5G1T-111C), your laptop or desktop computer can easily connect to 2.5GbE networks with the TS-453D to benefit from higher network speeds.

Transform your network with a wallet-friendly 2.5GbE switch
Upgrading your network shouldn't break the bank, and 2.5GbE connectivity provides immediately noticeable improvements compared to standard 1GbE. The QSW-1105-5T is an unmanaged switch with five 2.5GbE ports (backwards compatible with 1G/100M) and supports CAT5e cables to connect multiple computers and NAS. The QSW-1105-5T is energy-saving, low-noise, plug-and-use, and supports loop detection and blocking to provide a simple and effective high-speed network environment.

Quad-core 2.0 GHz (burst up to 2.7 GHz) with up to 8 GB memory
The TS-453D is powered by an Intel® Celeron® J4125 quad-core 2.0 GHz processor (bursts up to 2.7 GHz), features up to 8 GB DDR4 memory, and supports SATA 6 Gb/s drives. The support of Intel® AES-NI encryption engine boosts encryption performance while also maintaining the security of your NAS data. You can flexibly install SSDs for cache acceleration to maximize network and storage performance for data-intensive applications.

Ultimate visual experience with 4K HDMI display and real-time video transcoding
The TS-453D has an HDMI 2.0 port that supports 4K (4096 x 2160) 60Hz output, allowing you to directly view multimedia content saved on the NAS on a bigger screen. The support of high-quality 4K video transcoding enables the NAS to convert videos to universal file formats that can be smoothly played on multiple devices. The TS-453D also can stream videos through DLNA, Chromecast, and more to satisfy versatile multimedia application needs.

Build a Plex Media Server
By installing Plex® Media Server from App Center, setting up the Plex Media Server on your NAS is only a few minutes away. You can stream media files stored on the TS-453D to mobiles and media streaming devices (including DLNA, Roku, Amazon Fire TV® and Google Chromecast).

Move business data to the cloud flexibly and economically
The TS-453D perfectly integrates NAS with mainstream cloud services. By deploying cloud storage gateways and enabling local caching on the NAS, you can seamlessly use the cloud for storage, backup, and data recovery with low-latency access, providing an innovative hybrid cloud experience.

Optimized collaboration with seamless file sharing and sync
The TS-453D centrally stores data and files, and supports SMB/CIFS, AFP and NFS protocols for file sharing across Windows®, Mac, and Linux/UNIX networks. Coupled with the Qsync utility, any file uploaded to the TS-453D will be made available for all linked devices (such as computers, laptops and mobiles). You can sync shared folders and team folders for group file sharing to enhance the flexibility of team projects and collaboration. With the myQNAPcloud service, you can easily and securely connect to the TS-453D via the Internet for accessing, managing, and sharing NAS files. The Windows AD and LDAP services enable system administrators to configure user permissions by using an existing Windows AD® server, LDAP server, or the TS-453D's built-in LDA