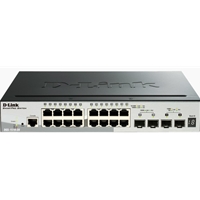 The DGS-1510 series is the next generation of smart managed witches. It contains 16, 24 or 48 10/100/1000 Mbps ports plus 2 Gigabit SFP ports and 2 10G SFP+ ports, as well as one 24 10/100/1000 Mbps PoE plus 2 Gigabit SFP ports and 2 10G ports smart managed switch. With it's 10G SFP+ ports, the DGS-1510 series is ideal for deployments in the SME/SMB core with its 10G uplinks connecting with servers equipped with 10G port connectivity. For medium to large scale enterprise deployment, it can serve as a good interconnection between the core switch and edge switch.

The DGS-1510 Series Gigabit Stackable Smart Managed Switches includes a PoE-enable switch for businesses looking to power VoIP phones, wireless access points or network cameras. The DGS-1510-28P is a 24-port PoE switch that provides 24 PoE-enabled ports that can support up to 30 W of power output following the IEEE 802.3at standard. The design allows more flexibility in power allocation for a variety of powered devices with affordable installation costs.

Featuring D-Link Green 3.0 technology, the DGS-1510 series offers a high level of energy saving and efficiency, as it also complies with the IEEE 802.3az Energy Efficient Ethernet standard. Support for IPv6 management and configurations ensures your network remains protected after the upgrade from IPv4 to IPv6. By offering multiple management options, the DGS-1510 Series allows quick deployment, infrastructure expansion, and seamless function upgrades. Built for small and medium-sized businesses, the DGS-1510 Series provide functionality, security, and manageability for a fraction of the standard cost of ownership.

Depending on whether linear or fault-tolerant ring stacking is implemented, users can use one or two 10-Gigabit SFP+ ports to create a physical stack. 6 units or 288 Gigabit ports can be configured for a stack using optional direct attach cables to provide high bandwidth on the DGS-1510 Series with cost efficiency. Users can mix any models from the DGS-1510 Series in a single stack to allow simultaneous and easy configuration, management and troubleshooting.

DGS-1510 series supports virtual stacking via D-Link's Single IP Management (SIM), allowing up to 32 devices to be managed via a single IP. This simplifies management of small workgroups or wiring closets while allowing the network to be scaled to handle increased bandwidth demand. SIM not only reduces the number of IP address needed in your network but also allow switches to be stacked together over Ethernet instead of using physical uplink or stacking ports. This eliminates the need for any specialised stacking cables while at the same time removing the distance barriers that typically limit your topology options when using other stacking technology.

These switches are equipped with a complete lineup of Layer 2 features including IGMP Snooping, Port Mirroring, Spanning Tree, and Link Layer Discovery Protocol (LLDP). The IEEE 802.3x Flow Control function allows servers to directly connect to the switch for fast, reliable data transfer. At 2000 Mbps Full Duplex, the Gigabit ports provide high-speed data pipes to servers with minimum data transfer loss. Network maintenance features include Loopback Detection and Cable Diagnostics. Loopback Detection is used to detect loops created by a specific port or VLAN and automatically shut down the affected port or VLAN. The Cable Diagnostics feature, designed primarily for administrators and customer service representatives, can quickly discover the type of error on cables and determine the cable quality.

The DGS-1510 Series supports Auto Surveillance VLAN (ASV) and Auto Voice VLAN, which are best suited to VoIP and video surveillance deployments. Auto Surveillance VLAN is a new, industry-leading technology built into D-Link smart switches. This technology consolidates data and surveillance video transmission through a single smart switch, thus sparing businesses the expense of maintaining dedicated hardware and facilities. ASV also ensures the quality of real-time video for monitoring and control without compromising the transmission of conventional network data. The Auto Voice VLAN technology enhances VoIP service by automatically placing voice traffic from an IP phone to an assigned VLAN. With higher priority and an individual VLAN, these features guarantee the quality and security of VoIP traffic. Furthermore, the DSCP markings on Ethernet packets enable different levels of service to be assigned to network traffic. As a result, these voice and video packets take precedence over other packets. In addition, with Bandwidth Control, network administrators can reserve bandwidth for important functions that require more bandwidth or might require high priority.